To illustrate the tonal effects possible in a wood engraving, look at the first illustration. It was made by Poyet, the famous 19th century French engraver of scientific and technical subjects, and appeared in the after-dinner science book La Science Amusante, by “Tom Tit” (the pseudonym of writer Arthur Good, also French despite his English-sounding name). The engraving was scanned at settings of 200% and 300 pixels per inch, giving it a final size of approximately 17” high by 11” wide. Note that different groupings of dots and lines of varying sizes and spacings depict very well the texture and shading of different materials like skin, glass, and china.

In the second illustration of the engraving, I have put numbered red frames around four different areas, each 4” square.

The thirdillustration presents all four of these areas magnified. In detail #1, the dot system shading the front of the thumb joint effectively shows not only the shadow, but also the slight saddle shape of the top of the thumb; all of this is managed by the arrangement, spacing, and size of the dots, rows of which seem to curve around the thumb. In details #2 and #3, parallel lines of varying width and spacing convey the curvature and reflection of glass and cork. Detail #4 shows the shading, reflections, and curvature of the china plate; notice how the curved lines on the plate rim taper slightly at the border of the shadow on the plate’s rim, which is an ingenious way to picture how shadows’ edges often seem darker than their centers. Of course, the closer the line or dot spacing, the darker the apparent shadow. 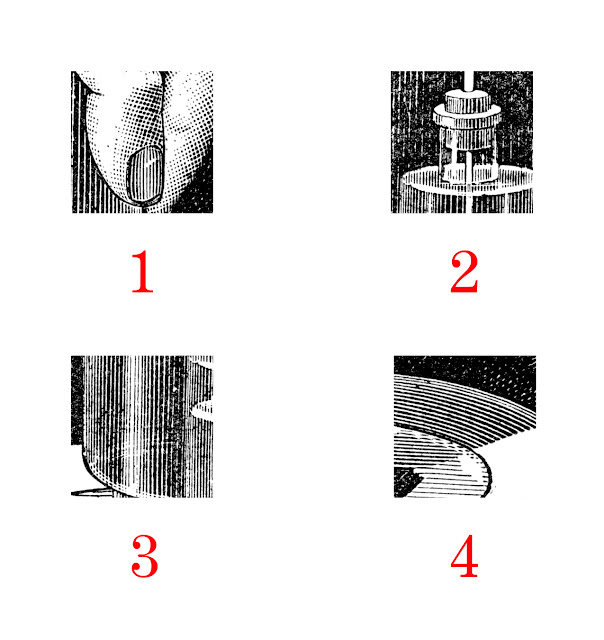 This example displays only a small number of the different line and dot systems used by wood engravers to convey light, shadow, and perspective in their pictures. Many other beautiful engravings await our concentrated study and exploration (not to mention their use in collage).

Sign up for the next CTA Certified Coach Program Today